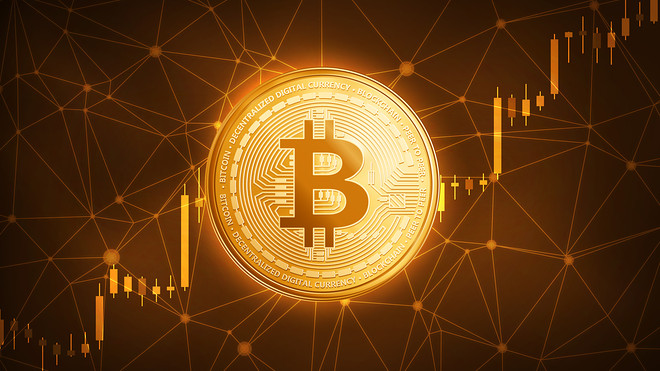 A lot of folks still treat Bitcoin as a curiosity. It's been available to common investors longer than Tesla (TSLA) has. And yet, for more than a decade, Bitcoin has been dismissed again and again as "the new kid on the block." In that time, we've seen its value explode… deflate… then explode again.

And mind you… that chart only shows the period since the start of the COVID-19 lockdown. If we look at the full year, the S&P and gold are actually flipped, with gold beating stocks 20-to-1. But Bitcoin holds on to the top spot. It's not even close.

Now, you could chalk Bitcoin's resurgence up to investors treating it the same way they treat gold… as a hedge in uncertain times. That's part of it. But it's not all of it. As with gold, the truth has more to do with what those money meddlers in Washington are up to.

To illustrate the point, we merged two key graphs: the federal funds rate… and the price of Bitcoin over the past five years.

As you can see, higher interest rates correspond with a massive drop in Bitcoin's value.

When the cryptomania of 2017 hit its peak, rates were closing in on 2% – the highest they'd been since before the Great Recession. Less volatile stores of cash like savings accounts and CDs were beginning to look as if they might start offering a decent yield again. And if you can get a solid return from the local credit union… who needs Bitcoin? But you know what happened next… The Fed did a sudden about-face, taking rates back down near zero. And Bitcoin? Well, the chart says it all.

Of course, yield-starved investors aren't the only ones pouring into Bitcoin. In May, Tudor Investment Corporation – a hedge fund run by Paul Tudor Jones – disclosed that it had taken positions in Bitcoin.
Legendary investor Bill Miller told CNBC late last year that, in addition to adding Bitcoin to his fund, he's kept 1% of his net worth in bitcoin since 2014. And in August, billion-dollar firm MicroStrategy Inc. (MSTR) made headlines when it moved $500 million in cash from short-term government securities to Bitcoin. CEO Michael Saylor explains the move:

It's a bet that's likely to pay off, especially now that Jay Powell has pledged to keep interest rates near zero for the next several years… at least. With yields from traditional sources drying up, businesses, institutions and investors will have no choice but to warm up to Bitcoin and its digital brethren. If your portfolio doesn't have any exposure to crypto, then it's time to rethink your strategy.