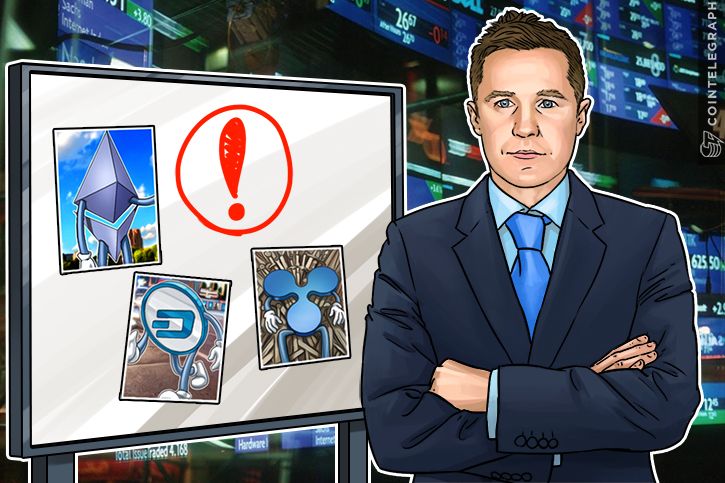 putting off what many traders consider inevitable—the “Flippening.” The Flippening, of course, refers to the potential future date when Bitcoin could lose its status as the largest cryptocurrency by market cap. Many coins have tried to usurp Bitcoin through technical innovations, corporate partnerships, and marketing strategies, but Bitcoin has continued to reign supreme.

Only recently has the Flippening become a real possibility. As the ether price has surged to a high of more than $400, Ethereum has become the first cryptocurrency to get within striking distance of Bitcoin’s market cap. Many crypto-pundits have begun to ponder what will happen if the Flippening does occur. Will it be the beginning of the end for Bitcoin? Will the Ethereum platform finally take the blockchain mainstream?

The Flippening “Makes No Sense”

Others, such as Gyft co-founder and Civic CEO Vinny Lingham, believe those questions are meaningless and irrational.

What Lingham’s tweet alludes to is that, strictly speaking, Bitcoin and Ethereum are not competitors. Bitcoin is designed to function as a currency (which is why Bitcoin nodes validate addresses), while ether is meant to serve as fuel for Ethereum’s decentralized smart contracts platform; this is why the developers of Ethereum refer to ether as a “token” and advise it is not intended to be used as a currency. However, that warning has not stopped people from treating ether like a currency.

Lingham notes bitcoin derives its value from its scarce and deflationary nature. Ether, in contrast, is inflationary. Ether issuance is capped at 18 million per year (the move to Casper should decrease that number further), so the rate of inflation will decrease every year, but the token will remain inflationary to some degree. Ether’s inflationary nature has proved unpopular with some Bitcoin proponents, many of whom were first attracted to cryptocurrency because of Bitcoin’s “digital gold” nickname. Flippening numbers on Thursday.Additionally, as Lingham points out, there are already far more ether in circulation than bitcoins (~92.5 million ETH to ~16.4 million BTC).

Lingham’s tweet triggered a litany of replies (more than 130 at the time of writing). Lightning co-founder Elizabeth Stark ascribed the Flippening to short-term ether speculation. She stated that “Users and real use cases are what will matter,” not short-term market cap rankings.

Before long, the thread had devolved into arguments about the fundamental nature of money. BitPoint CEO Aaron Foster, for instance, argued that Ethereum will surpass Bitcoin’s market cap and that to deny that ether is money is “stupid,” even though Ethereum nodes do not validate addresses. “What is money?,” he asked. Olivier Janssens rejected the assertion that Ethereum cannot serve as a store of value.  Others compared ether to the U.S dollar (both favorably and unfavorably) and pushed back against Lingham’s assertion that deflation is a positive attribute for a currency to have. In any case, the Flippening frenzy should serve has a reminder that no matter how technologically-advanced humanity becomes, it will likely never reach consensus on one of the society’s most fundamental questions: “What is money?”